The term "window gluing" comprises essentially two types of media. On the one hand, it refers to action stickers, on the other hand it deals with the permanent adhesion of windows. Both variants of the window gluing are attached in the majority of cases from the outside, that’s why this belongs tot he area of outdoor advertising. Used in the indoor area they are mainly used to serve for decoration purposes with the goal to create a certain atmosphere and for example a feeling of freshness or cosiness.

Action stickers are only temporarily appropriate, for example for Valentine's Day, Easter or on Christmas. With this type of window gluing in turn two variants can be differentiated.

Smaller formats, so-called glue visions, can be locally attached bubble-free and, after the end of the promotional period, they can be removed without leaving any residue. On the original carrier paper, these can be applied at the next action re-usable. GLUE VISIONS are always fitted from the inside. According to the needs of the customer they are printed in a way that they are legible either from the outside, from the inside or from both sides. This innovative window gluing product developed by Effekt Grafik impresses by its simple handling and a high level of printing quality.

Temporary window gluings can also be used for example to display window decoration in the form of a framework to highlight or to complete. Due to the nature of the slides as well as to the design of the elements such adhesive markings however must be installed by trained fitters.

For full window gluing generally long-term permanent slides are used which are printed on roll machines. These are, for example, used if during construction measures the view at the construction site should not be visible. A large-area, translucent window gluing can already point to the opening or re-opening of your business. If there is a large number of windows for logos available they can be used by large-format digital printing in order to point to strong images by attention to each individual portfolio segments. A special laminate protects the foil or the colors against solar radiation.

In addition to the qualitative production of high-quality window gluings Effekt Grafik convinces through a wide range of related services. From the creation of the design over the measuring up to the installation we offer everything from a single source. Since the installation of large adhesive foils requiresa great deal of skill and a certain routine, this should not be done by the customer himself. Our technicians guarantee a correct installation as well as a perfect result, on the basis of up to 30 years of experience. Thanks to our comprehensive assembly network teams we can also act for window gluings nationwide.

Simply get in touch with us for a request or an offer for your individual window gluing. 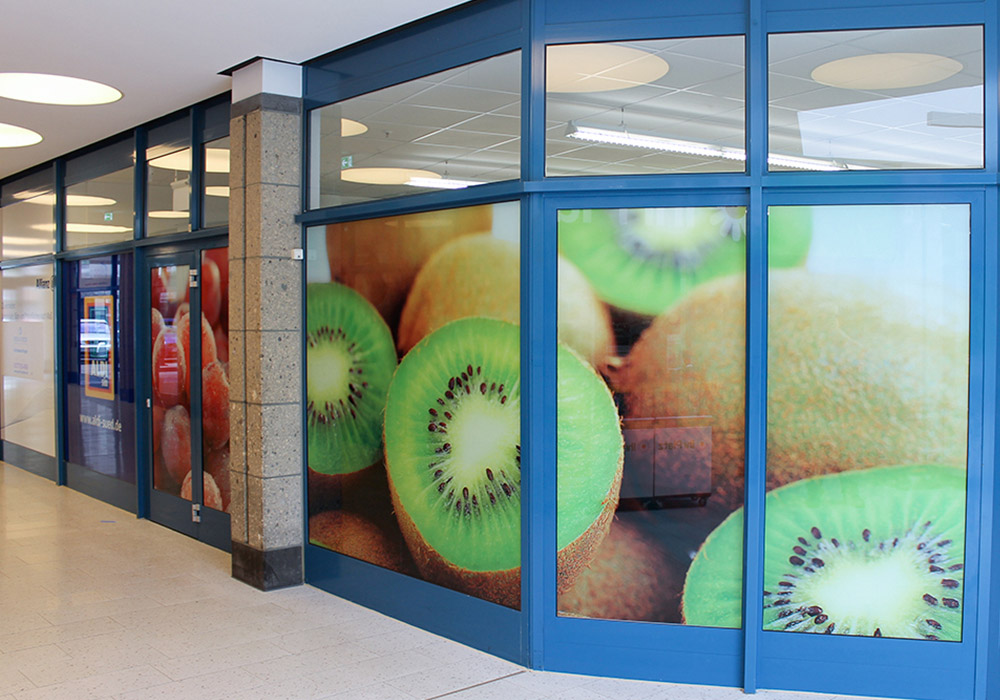