From the local area, for the whole of europe 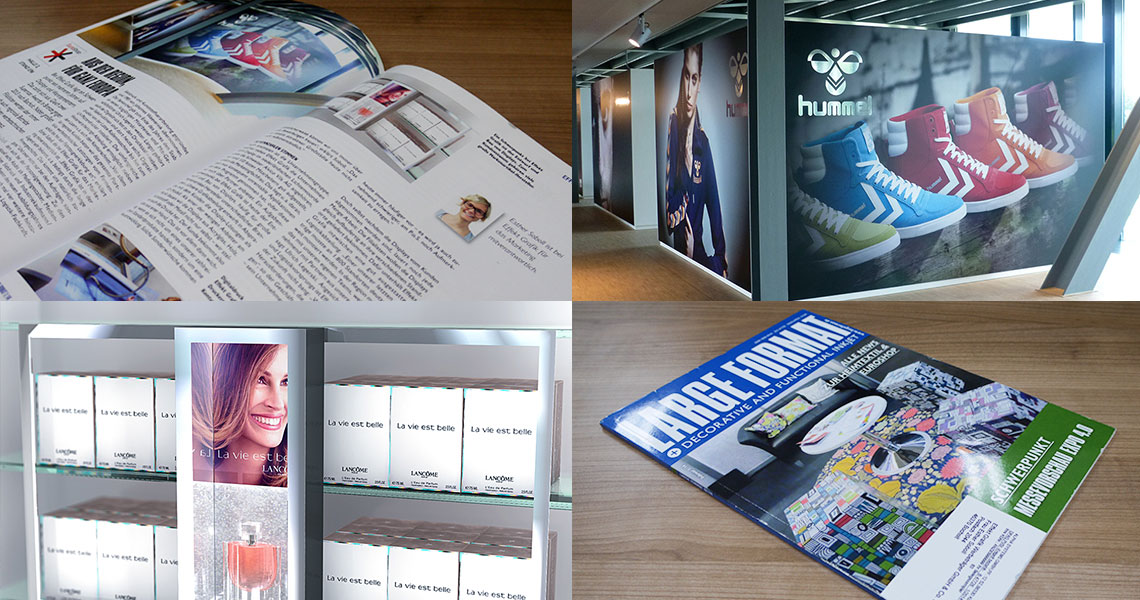 At Grafik Effekt, a focus for several years has been on display and goods presenters. This pays off: Two Super Star Awards in 2013 bronze went to Bocholt. In addition to large chain stores, regional businesses are still well cared for with respect to all their advertising requirements.

Nothing is as constant as change - at Grafik Effekt, we totally agree with this truism: In 1970 the company was founded as a production company in the field of screen printing and plastic processing. For a long time, digital printing has belonged firmly in the pressroom - in addition to four screen printing lines, are there today six digital printers installed from the latex-roll machine to the UV flatbed printer. The extensive postpress department makes possible contour cutting alongside the laser printers and others. "Especially for regional customers, we offer the entire portfolio of advertising technology services from the company sign all the way to vehicle wrapping" says Esther Soboll, who is at Grafik Effekt responsible for marketing. "Effekt Grafik is in the area very well known, among other things, due to the long company history. That benefits us, of course." And not just the number of orders, but also in the recruitment: Among the current six trainees as media designers, media technology screenprinting and industrial businessman/woman, at the beginning of the new training year on 1 August 2014, again four more are being added - for the first time also a logistics specialist. "Fortunately, we can always be happy at having a lot of applicants," said Soboll. „That's for attractive larger cities are no longer self-evident.“

Apart from that, the group of companies, which alongside Effekt Grafik includes Alvico Vils AG, based in Eglisau in Swiss, has approximately 110 fixed employees, explains the marketing expert. This is partly because it has taken systematically unprofitable applications from the programme, or only made them available through partners. A main task for Effekt Grafik is now the design and construction of displays, often for large brand manufacturers in various industries: "Our graphics department designs display solutions as a 3D model, in consultation with the client. As one of the few providers in the market, we don't only build the displays made of acrylic glass, wood, plastic or metal themselves - we also produce the prints. So the customer gets everything from one source. This is especially important if it is not one of our numerous standard products, but a new development. Such special requests come today ever more frequently - it is indeed increasingly difficult to attract attention even at the POS."

But even after the displays have been accepted by the customer, there is still a lot of work. The stores want exactly the same manufactured displays to be delivered their various locations. For this Effekt Grafik now maintains a well-equipped logistics department. "One of our last orders had to be mounted at 1,800 sites throughout Germany. In the local region, we do that with our own teams, further away increasingly with partners from our network" says Ulrich Legerski. Given the knowledge and logistics the boss of Effekt Grafik is not concerned about the future: "We look forward to the challenges over the next few years", says the Managing Director. He can - his company is prepared.