Everything from a single source by Effekt 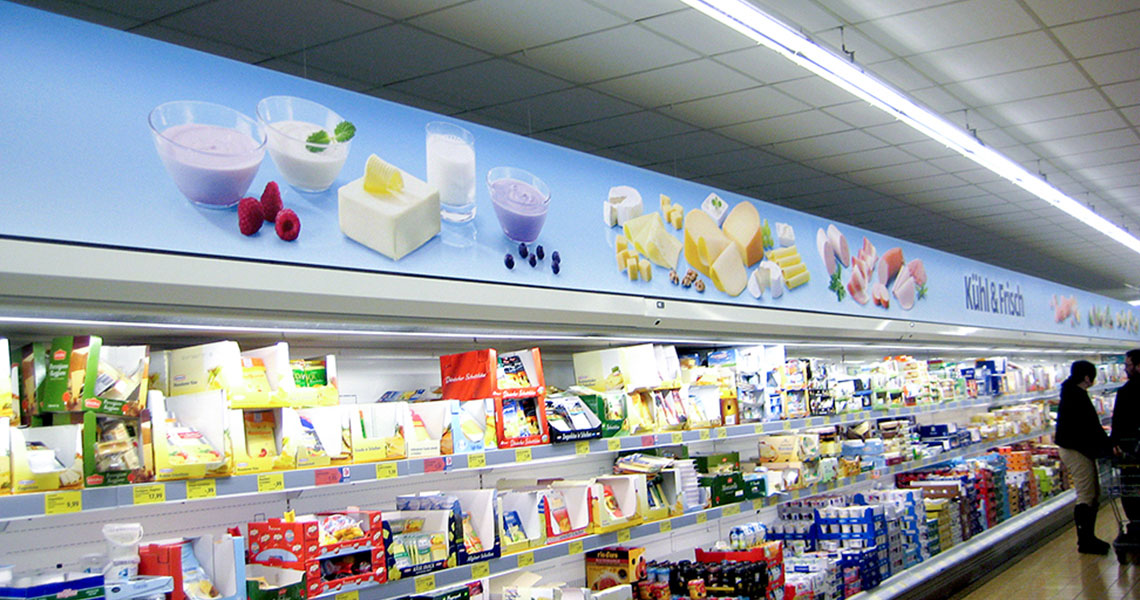 Effekt Grafik Media Gmbh realizes a large-scale project for Aldi South: under the motto „Cool & Fresh“ specially developed covers were mounted on the top surfaces of refrigeration units across Germany.

„In the beginning it was the biggest challenge for us to combine the attachment to the suspended ceilings in accordance with the maximum load on the one hand and the fire protection standards on the other hand“, , Ulrich Legerski, managing associate at Effekt Grafik summarized. In this regard however an innovative solution could be found: In cooperation with two other companies a special ceiling suspension kit was developed and finally subjected to a CE certification. Four years of development have preceded before. During that time a project coordinator, who guaranteed a smooth organization, has ensured a professional all-round care.

At all stages of the project it was concentrated on a high quality and precision: From the printing process – which has been impressively succeeded despite difficult motives – to the further processing, packaging, the organization of the Germany-wide distribution up to the installation. Customized solutions have been designed according to the special individual circumstances. The smallest panel measures 3.75 m, the longest 38,75 m. Even special constructions have been realized under certain conditions. In less than one year about 1800 Aldi South stores were equipped during the continuous business operation with the refrigeration unit covers.That they created a special atmosphere can be noticed immediately by every visitor and also becomes very clear by comparing the before and after pictures. The project could be finished three months before the end of the period.